I don't think I have ever labeled my eating habbitts in my life up until 10 years ago. I use to love and take in all types of foods. Shellfish, good New Haven style pizza, a veggies lovers sub, Mexican, Italian, Chinese, Marco an,Steak, boiled Lobster, steamed crab with butter and lemon sauce, fresh baked bread, coconut cake, apple pie,pecan pie. You name it I would try it.
Today, I can not eat half of those items on the list. I don't know what happened, I have never been fully diagnosed. However, about 10 years ago I was eating a large handful of trail mix and all of a sudden my tongue started to swell. Southern Man at the time, was my fiance, I scared him to death with my reaction to the trail mix I was eating. So much so he rushed me to the doctor and insisted I was food tested for allergies that day.We later came to find out I had sever food allergies. I just about laughed so hard I nearly knocked my self off the exam table as the doctor read the list of no-nos. He would say, no shellfish, I would reply I had crab buffet the night before and here I am! He would then reply, you have angels watching over you!
He would say no more nuts, I would say I eat peanut butter and jelly every day and trail mix and he replied and here we are today because of those choices!
The darn list went on and on!! At the end of his list I began to cry, I said well I guess I will just have bread and water! He said no you won't because you are allergic to bread!! Actualy he said wheat and gluten!
I thought my life was OVER!! I grew up in 2 large families filled with pizza, pies, shellfish, you name it, it was on that darn no-no list now!!
I tried to deny it! I went ahead and forged on! However the reactions got worse and bendryl became a routine part of my day. I knew there was no way out, I had to make a change. So I just gave it all up all together! Accept for a holiday treat. Well that worked for a while. Until Christmas rolled around that year and I wanted to make cookies. I thought I will still make the cookies I just won't eat them! WRONG!! I nearly gave my self a life altering sinus infection from the over overexposure. Well what the heck was I to do???
I reached acceptance a few months later and I started trying to find alternatives. There was NOT much out there. Especially tasty ones! God bless Southern Man, he too tried to eat like me, for support. Well he was just as grumpy as I was, that was not going to work! So I learned to live on a new adventure and he learned to not feel guilty.
Today a large part of my diet is eating gluten-free. And Southern Man is a good egg, he eats the gluten- free pastas, my baked goods and our finds along travels. It has come such a long way in 10 years!
I use to dread travel after I was new to learning to live gluten free. Now, I am shocked every time what I will find on my journeys.
In fact, look what I found in Hawaii during my recent travels there! 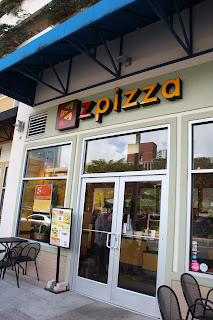 If you have never had Zpizza, you are missing out big time!
The menu has a ton of organic choices! Not to mention...GLUTEN-FREE pizza!!
Here is a little tour it's a simple place. 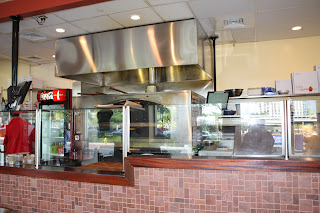 There large cooking area and lots of tables. They keep it simple! I like simple!
Of course I got my usual! 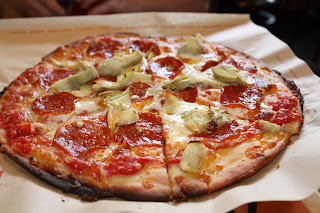 Can you just taste it? Mouth watering peperoni and artichokes! I am craving one now!!
Southern Man could barley grab the shot before I stuffed the entire pie in my mouth! 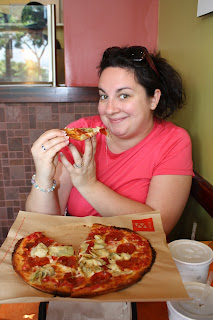 YES, those are possessed eyes!! I was so hungry!! We had been exploring for several hours and I needed my lunch!
I wish I had ordered another one to bring back to the hotel, that was soo yummy!!
http://www.zpizza.com/
This is a trip you want to make and bring home extra when you order!
It is amazing to me how far gluten-free living has come. Especially what yummy food I find on my travels these days!
Posted by Cynthia and the farm house at 9:29 PM

Promote Your Page Too

Cynthia and the farm house
Several years ago, I came to visit my mother and step-father for about a month during a college break. Little did I know during that visit I would meet the love of my life and make a 180o degree turn in the path I was on. In 3 months, time I moved from a big city where, I lived in a small apartment and did not own a vehicle because I walked everywhere or took a cab. To moving to one of the most rural and young developed places I had ever been. Get engaged and become a step-mother to, two of the most wonderful and adorable 3 and 5 year olds I ever met. All the while the charm and true southern gentlemen I had found (Southern Man) was over the moon with excitement with the start of our new life! We had an amazing wedding and bought our first home, which was a contemporary style city like town home. I figured you can take the girl out of the city, but you cannot take the city out of the girl. Well 4 children, an SUV, and two dogs here we are several years later and the city has left the girl. I am on a quest to find my perfect Farm House and live a more traditional American dream, with a few twists! Join me on my journey and read my everyday laughs and cry’s in my journal!

Write to me! I would love to hear from you!!
cynthiaandthefarmhouse@gmail.com